The Polish-Lithuanian Commonwealth - An Introduction

The Fleet So Far


Hello all and welcome to a look at one of my three Dystopian Wars Fleets. I'm starting with the Polish-Lithuanian Commonwealth (PLC). Fast, aggressive and with a unique aesthetic, they have been great fun to paint and thoroughly enjoyable to play with in the few games I've had with them.

The PLC is a minor nation within the Dystopian Wars world. Natural (if uneasy) allies of the Russian Coalition, they are unique in that their navy is entirely based around skimmers. This allows them to work just as effectively on land as on the sea, and in purely naval games gives them the ability to move over terrain that would be impassable to conventional ships. Their gunnery is generally most effective at close range (range bands 1 and 2), and all primary weaponry is loaded with incendiary ammunition. This fire strips enemy ships of their crew, making it easier for the Poles to use their second trick, boarding!

In terms of the painting, I took a very different approach to the PLC compared to my other fleets. Compared to the very utilitarian Danes and Prussians, PLC ships are relatively ornate, with wings mimicking those of the famous winged-lancers. I therefore decided on a much more ceremonial colour scheme, green on one side, grey on the other (I was tempted by white but have mostly learned my lesson on painting that colour now) with plenty of gold detailing. Red was used as a spot colour on the turrets as a call-back to the traditional Polish colour.

And now, onto the fleet. 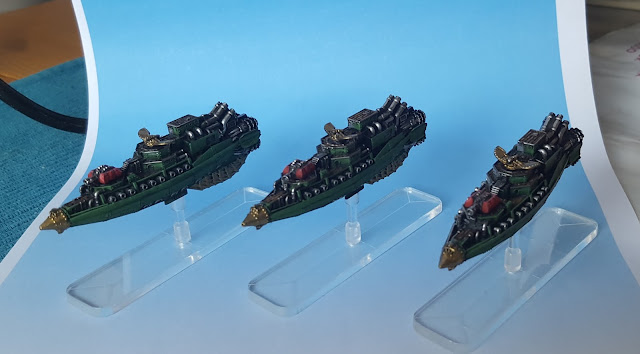 Going forwards, I have an aerial box primed and ready to paint to add reinforcements to this fleet. Featuring two varieties of medium airship and a glorious sky fortress, I'm looking forward to getting started with them.

Thanks for reading!
Posted by Whyarecarrots at 15:50